The electrical resistivity, thermoelectric power (sometimes known as Seebeck coefficient or thermopower) and thermal conductivity are measured within the temperature range of 3.5 K < T < 310 K using our proprietary measurement system. The measurement itself is realized using close cycle refrigerator, the vacuum is better then 10-4 Pa. Low pressure or remaining exchange gas is necessary to avoid heat exchange between the sample and surroundings. The measuring apparatus is shown on the figure below. 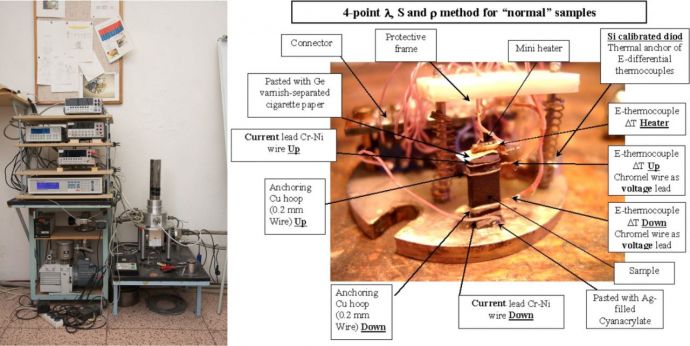 The low temperature apparatus including the sample arrangement are shown above. Four (Cu or Ag wire) contacts are attached to the rectangular shaped sample, which is placed in a special measurement cell. A steady state DC four-point method is used for the measurement of all thermoelectric characteristics, the well established method based on the detection of residual temperature and voltage offsets is applied. Ag paste used to create the thermal and electric contacts between the Cu(Ag) pads.

The contact topology is implemented as follows: the differential E-type thermocouples, which detect the temperature gradient ΔT, are simultaneously used for the measurement of voltage drop ΔV. The peripheral Cu contacts are used for the electrical current probing the electric resistivity. A small resistance heater is attached to the top side of the sample, its temperature is also monitored in order to determine the thermal radiation losses. A thin insulating paper is placed between the heater and the sample to avoid the short-circuiting between the heater and sample. Thermal contact between the cryostat and copper base of the measurement cell is improved by means of thermal paste (Apiezon).

. Simultaneously, the thermal conductivity is calculated as

, where PSample is the effective heat flowing through the sample, A is the cross-sectional area of the sample and ΔT is the temperature difference between the contacts separated by the length L. To realize the measurement at constant temperature (temperature fluctuations <50mK) and minimize thermal losses the low temperature cell is covered with polished Cu hood with a mass of ~300 g, high mass ensuring the temperature stabilization at each measurement step. An additional polished Al based thermal shield screening thermally the Cu hood ensures the minimization of radiation losses at low temperatures as depicted in the figure below.

Fig. 2.: Detailed link between the cryostat (a), sample (b) and are clearly shown and schematic sketch showing the sample arrangement for the measurement (c). 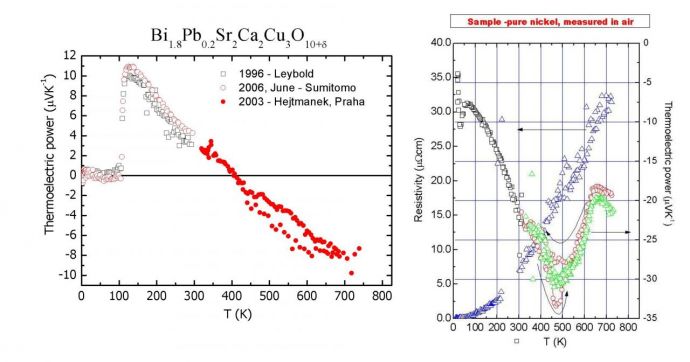 Similarly, for high temperature measurement of all thermoelectric characteristics a steady state DC four-point method is used. The realization of the contacts depend essentially on the character of measured material, often Ag paste is used to improve the thermal and electric contacts between the S-type thermocouples and the sample. The contact topology together with stability criterion is clarified in the detail above.

In addition to the simultaneous temperature and electrical monitoring of the thermoelectric module, the actual heat flow through the module, heat rate and mechanical load are also monitored. The key component of the testing bench represents the thermally shielded heating block with mechanical loading system and cooler (Fig.5) 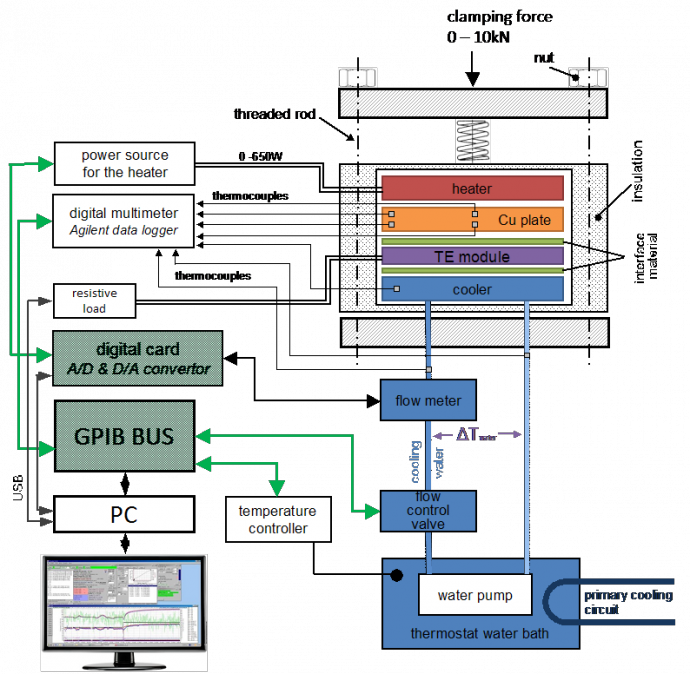 Fig. 6.: Detail of thermoelectric module characterization chamber (left) and the apparatus with nearby accessories (right).